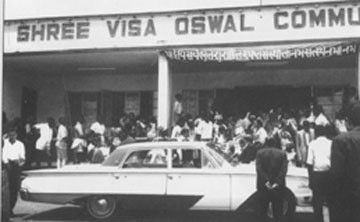 The origin of the name “Oswal” is tied to a small village in the Jodhpur District of Indian State of Rajasthan called Osianor Ossiya.There was once a large city at the site of Ossiya (osian). The ancient names by which this city was known at various times were Uplesh Pattan, Urkesh, Melpur Pattan and Navmeri. Upkeshpattan is said to be analogous to such a town situated about 32 miles northwest of Jodhpur in the state of Rajasthan. It was the home to a Jain monastic order called Upakesh Gachchha [2](which is now extinct) belonging to the Svetambara Jain tradition.

According to an Upakesh-gachchha-charitra composed by Kakkasuri of Upakesh Gachchha in vikram 1393 [3] (but some say it was written in 17th century), Jain Acharya) Shree Ratna Prabhu Suriji the 7th Acharya in the line of Jain tirthankar Parshvanatha’s sect, came here in 457B.C. with his five hundred disciples in year 70 after Mahavira’sNirvana(457 B.C.). However other scholars do not agree to this.

King Upaldev and his very able minister Uhad ruled the city at that time. After receiving proper guidance from Acharya, the King, his ministers, and more than one thousand Rajput soldiers gave up alcohol and meat and adopted Jainism. The Acharya gave this group the name Oshwals or Oswals. Thus, a new Jain corps called the Oswal Gaccha, the ancestors of the Oswal community, came into existence.

Also, in the documents available from city of Korta (Rajasthan) there is a mention of a conversion of a large group to Jainism by Acharya Shree Ratna Prabha Suri in Osian in the Vira Nirvana Samvat 70 after Mahaviraís Nirvana.

Around 10th or 12th century AD, because of adverse natural conditions, a small number of these Oswal Mahajans left the village of Osian in search of better life and migrated to Sindh – what now is called West Pakistan & southern part of Rajasthan ie. Bhinmal, Jalore, Raniwara, Sanchore. The conditions in Sindh were not any better. So, continued the migration southwards into Kutch, now a part of the State of Gujarat and settled in Vagad district. Later on, some moved to Kanthi district and onwards into other parts of Gujarat.Today, although many Oswal Jains visit Osian, there is a legend that all Jains must leave by sun set or risk being cursed. Today, very few Oswals actually live in Osian.

The original Kshatriyas were joined by people from other castes as Jainism grew as a philosophy.
During the course of Indian history, Oswals are known to have played an important part in assisting many Hindu and Muslim princely states to finance their activities. Many Mughal administrations have placed great value on the Oswals ability to generate revenue. Many Oswals wonpatronage from various Mughal Emperors due to their strong presence incommercial ctivities.

An Oswal immigrant who is said to have exercised decisive role in a series of events which culminated in the Battle of Plassey was Jagat Sheth a title bestowed upon him by the Mughal emperor, Aurangzeb and who in revenge of a personal outrage financed and sided with the East

India Company to bring about the downfall of Siraj-Ud-Daulah leading to the East India Company’s primacy in Bengal.

Within the caste hierarchy of the Oswals there are sub-groupings of Panca, Dasa and Visa, which mean five (5), ten (10) and twenty (20) respectively. These sub-groupings refer to various caste endogamic structures within the Oswals.

Another sub-group of Oswals within the Kutch and Halar areas of present day Gujarat complete the non-marwari speaking group. These primarily speak Kutchi or Gujarati as their mother tongue. Over the preceding centuries, many Halar based Oswal families migrated first to East Africa and then to the West and have founded distinct close-knit societies in these countries.